What is New Horizons? 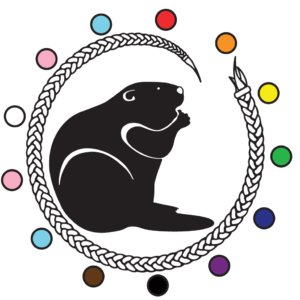 New Horizons for 2S-LGBTQ+ Older Adults is committed to lessening the social isolation experienced by this population through the creation of online and in-person social and support opportunities, educational workshops and culturally relevant programming. Our team is committed to community building, inclusion across identities, and the creation of spaces where all people on the 2S-LGBTQ+ spectrum feel welcome, heard, and honoured.

The New Horizons for Seniors Program is a Pan-Canadian project funded by Employment and Social Canada. The New Horizons for 2S-LGBTQ+ Older Adults program is Central and Northern Ontario specific, servicing the Simcoe/Muskoka, North Bay, and Sudbury areas. Participating agencies include Gilbert Centre and Mamaway Wiikdokdaadwin, AIDS Committee of North Bay and Area and the North Bay Indigenous Hub, and Reseau Access Network and Ontario Aboriginal HIV/AIDS Strategy. Coming together as a larger team allows for community building across regions, and a larger network of support for the vast geographical area that we serve.

Our Older Adults programming is currently online only. We offer weekly social and support meetings, webinars, one-on-one check-ins, assistance in connecting you to outside resources, and more! Once it is safe for us to gather in-person again, we will continue to offer our virtual services to further enhance our programs. Check out our Facebook for announcements about in-person programming. Our Older Adults programming is open to all who fit the program criteria and wish to connect.

While everyone is welcome, there will occasionally be programming specifically for those who identify as Two-Spirit or Indigenous LGBTQ+.

Older & Bolder North is a social and support group for 2S-LGBTQ+ adults who are 55 and older. The need to connect is greater than ever before with COVID-19 trying its best to keep us isolated, and we are happy to provide a safe, judgement-free space to be out, proud, and social!

Coffee and Chats is an informal virtual drop-in social group for those who identify as older adults (55+) within the 2S-LGBTQ+ community and their Allies. Meetings will be held virtually through Zoom (phone, tablet, computer with microphone and/or camera needed). A link for the group will be provided upon registry.

During these tough times of social distancing and lockdowns, we’re offering over-the-phone socializing for an hour each week. You pick the time, you pick the topic, we’re just here to listen!

We will be providing knowledge sharing or a workshop every month focused on the Indigenous culture and language. 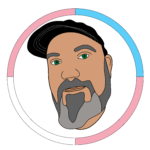 I am the Seniors Program Coordinator at Gilbert Centre in Barrie, ON. As a queer trans man I have lived with many different identities at different times, and held space in multiple, diverse queer communities. My passions lie in Trans activism, 2S-LGBTQ+ history, and harm reduction. 2S-LGBTQ+ seniors are a part of my family, both blood and chosen, and I am fiercely passionate about making sure that they are seen, heard, respected and loved. Community building is the cornerstone of my efforts in this role, I believe that stronger communities create strong and resilient individuals.
Close 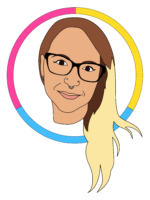 Hi folx! My name is Ashley Di Benedetto, pronouns she/her/hers. I am so excited to be offering the New Horizons for 2S-LGBTQ+ Older Adults Program in North Bay focusing full-time on supporting the trailblazers in our 2S-LGBTQ+ community. I am proud to be hosted out of the AIDS Committee of North Bay & Area as they have a long-standing history of supporting marginalized populations and meeting people where they are at.
As a resident of North Bay, I am a pansexual cis-gender woman with a passion to advocate for clients’ rights, delivering programming that is accessible and creating a safe space for all people within the 2S-LGBTQ+ community to be their true self. I dedicate my work to being a strong advocate and hope to positively impact the lives and well-being of 2S-LGBTQ+ folx in our communities across Ontario.
Close 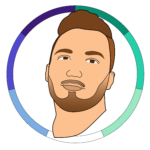 Brandon comes from Rockland, Ontario, a small rural town in the Ottawa Valley but has lived in Northern Ontario since 2017. He has a keen interest in working with marginalized rural populations; more specifically, Brandon is interested in the social determinants of health as they relate to older adults living in rural environments. Brandon has an academic background in both the behavioural and nursing sciences. As such, he prefers a multidisciplinary and collaborative approach to his professional and academic work. Brandon’s research interests include the health and well-being of older adults, focusing on cultural and socio-environmental factors that may influence health outcomes and quality of life. In his spare time, Brandon enjoys camping and being outdoors; his favourite trail in Northern Ontario is “The Crack” in Killarney!
Close 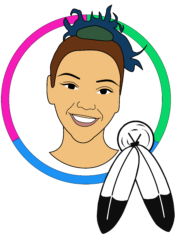 My name is Phoenix and I am 2-Spirit, Bear Clan from Eagle Village First Nation; living in North Bay, Ontario. My pronouns are THEY/THEM, and I work as the 2-Spirit Outreach worker at the North Bay Indigenous Hub.

I am very passionate about Indigenous issues such as the Missing and Murdered Indigenous Women, Children, and 2S-LGBTQIA+ movement. I am taking an active role in learning my culture, speaking my language, and raising awareness on Indigenous issues in honour of my Grandmother Violet; a Residential School Survivor.

I am also Secretary and Child Liaison for the Protectors of Youth Riding Club (PYRC). We are a group of motorcycle enthusiasts who are dedicated to the support, protection, and advocacy of bullied, abused, and ill-fortunate youth aged 0-17. We are there to act as mentors, friends, and protectors of our youth. My background in Early Childhood Education helps me relate to, and help disadvantaged youth overcome hardships.

In my personal life, I am an out and proud drag performer, pansexual, and live a polyamorous lifestyle. I am a lover of RPGs (role playing games), D&D (Dungeons and Dragons), comics, anime, and Pop Culture. My perfect evening would be playing games with my friends while ordering in some great food! I also have a huge heart for animals, and anyone that knows me will tell you that I try to make friends with most animals I come across- Here kitty, kitty!
Motto: “Be who you needed when you were younger”. 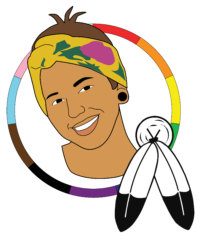 Aanii kina weya! My name is Leisha and I am the Two-Spirit Outreach Worker at Ontario Aboriginal HIV/AIDS (Oahas), servicing the Greater Sudbury Area. I’m a panromantic, Two-Spirit person who uses they/them/theirs pronouns, with mixed European and Algonquin ancestry. As a disabled Two-Spirit person, I am a strong advocate for accessibility awareness and the intersectionalities that come with being Indigenous, 2S-LGBTQ+, and having an invisible illness.
Close

As Two-Spirit Outreach Workers, our goals are to:

What Does Two-Spirit Mean?

The term Two-spirit came from the Third Annual Intertribal Native American/First Nations Gay and Lesbian Conference in Winnipeg in 1990. Two-Spirit is used as a Pan-Indian term to describe Indigenous people who traditionally assumed or crossed multiple gender roles and held great importance within their communities. While many nations had their own terms for Two-Spirit people, historically this role can be seen differently in different cultures and nations.

Some people use the term as a form of decolonization – taking back their cultures and traditions. They identify with this term in community and hold different responsibilities as a Two-Spirit person. However, not all Indigenous people take on this identity and instead use modern terms from the Western LGBT+ spectrum. They may also use Two-Spirit as an Indigenous version of the LGBTQ+ spectrum. 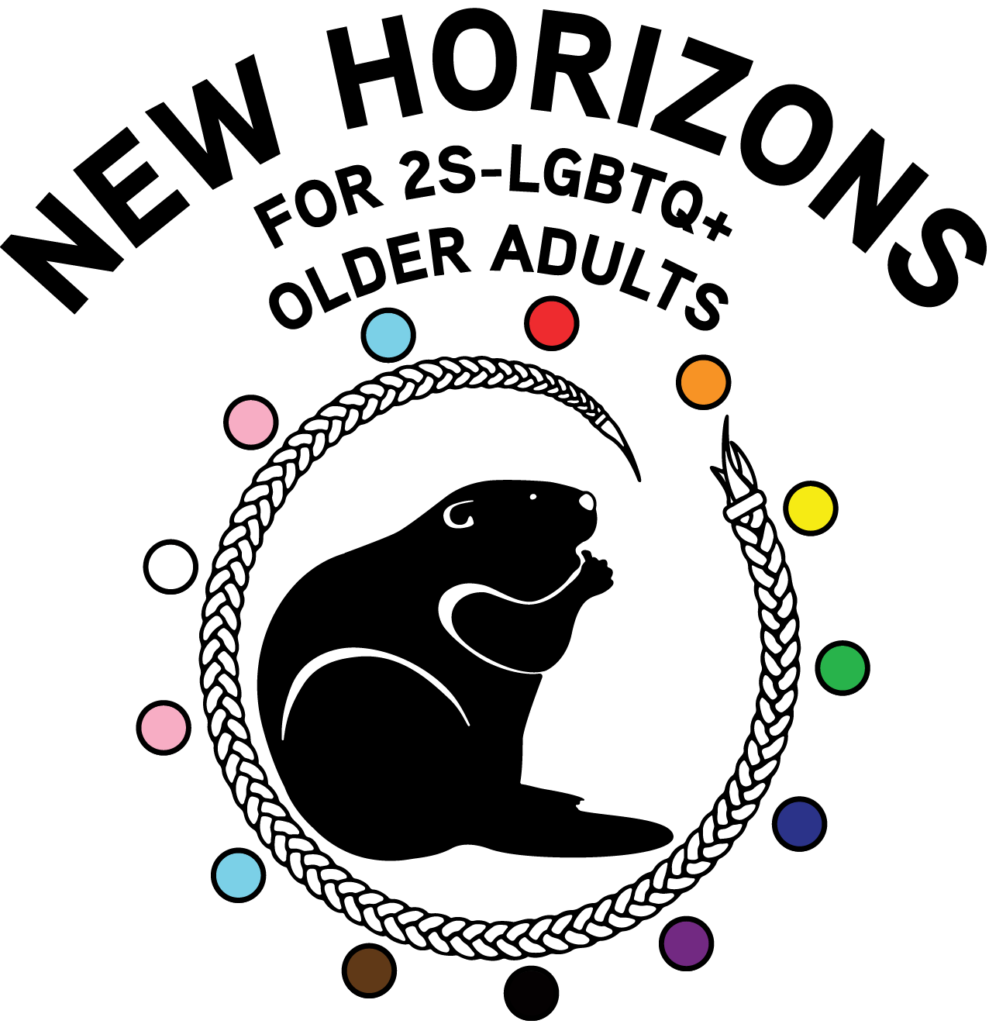 The Seniors Program Coordinators and the Two-Spirit Outreach Workers collectively created the logo for the New Horizons 2S-LGBTQ+ Seniors Project. With the very talented graphic design skills of Leisha Neuman (Two-Spirit Coordinator – OAHAS) we were able to have this in complete form. The collective intentionally chose imagery that would speak to the Indigenous community while not being overtly Indigenous to people outside of this community. We wanted to ensure that Indigenous people knew they were welcome in the program and that they were a priority while also allowing non-Indigenous folk to feel comfortable accessing these services as well without feeling as though they were taking up space in a program that was not designed for them. Striking this balance was a priority for us which is why we chose the following imagery:

The circle was chosen to represent community. Historically, Two-Spirit people were kicked out of Indigenous circles. This circle is representative of an invitation to our Two-Spirit clients to join our circle and welcome them back in.

The choice to include sweet grass was multi-layered. Sweet grass is one of the most important ceremonial plants and invokes kindness. The braid itself represents balance and strength. Each strand is representative of the mind, body and soul. The intertwining and braiding of these strands strengthen them, symbolizing the intent of being stronger together rather than alone.

These are representative of the 13 moons on the Indigenous lunar calendar.

In 7 Grandfather teachings the Beaver symbolizes wisdom. The Beaver uses his natural gift wisely for his survival. He alters his environment in an environmentally friendly and sustainable way for the benefit of his family. Indigenous people have lived their lives in much the same way as the Beaver using their natural gifts to survive and provide for their families and communities.

In addition to the imagery that we chose to speak directly to the Indigenous community it was important for us to create an image that would speak to people who identify as 2S-LGBTQ+ without being overtly queer identifying as well. The rationale for this was the recognition that some seniors within the 2S-LGBTQ+ community may be hesitant to engage in programming that is identifiable to others as being a queer program as some may worry about being out to people, they are not comfortable with.

The Beaver we felt also was representative to non-Indigenous people as well. The Beaver is commonly seen as a symbol of the North and being that we are prioritizing Northern Ontario in our programs and services we thought this would be a great way to tie this into the logo. The other thought process to this was that the Beaver well-represented the idea that 2S-LGBTQ+ people adapt to their environment for survival much like the Beaver does. They disrupt when they need to and build their communities.